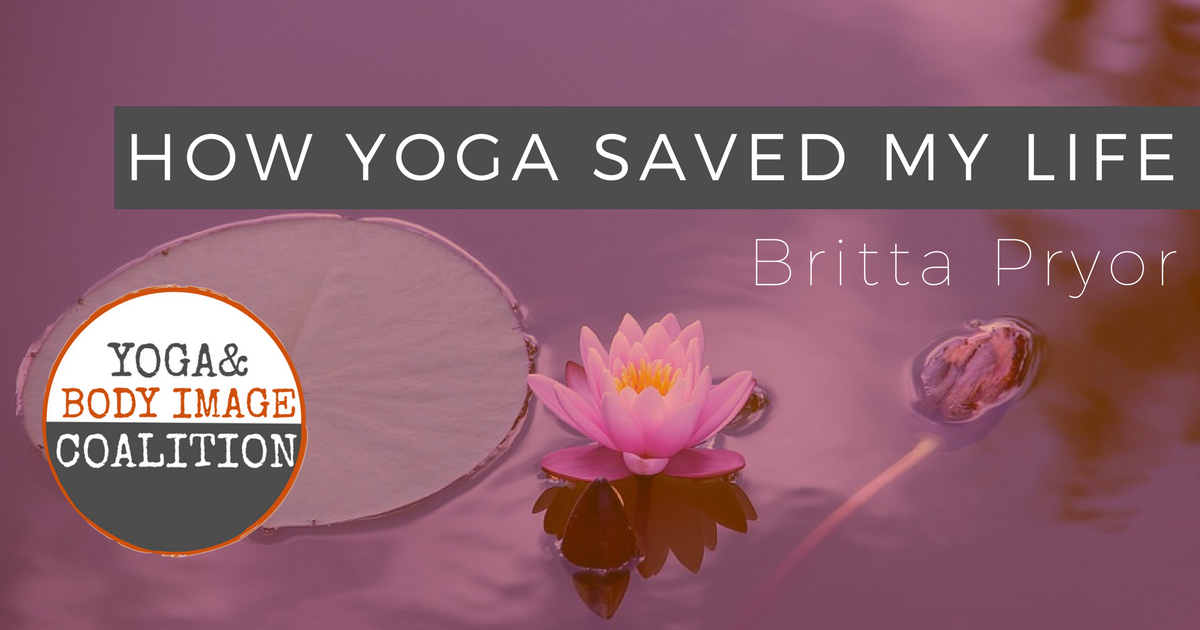 The following is last of six YBIC National Eating Disorders Awareness Week daily posts that highlights how the practice of yoga can be an integral component in the effective treatment of and on-going recovery from eating disorders and disordered eating.

Hello my name is Britta Pryor, I am a 26 yr old yoga teacher from the sunshine state, and I would like to share with you how yoga saved me from anorexia.

As you may be aware,  anorexia has the highest mortality rate of any mental illness. Unfortunately, I came very close to being part of that statistic. More specifically, I technically died. My weight had dropped so significantly that I was regularly experiencing heart palpitations, dizziness, and fatigue.  I went to bed every night wondering if this was the night I would not wake up. And worst of all, I was ok with that. Part of me just wanted it to end. I wasn’t living anymore, I was surviving. I hated everything. I slowly pushed everyone away because they asked too many questions and it took too much energy to maintain relationships.

This continued for years until one evening, I was getting ready for bed and my body felt heavy. Then it became harder and harder to breathe. Eventually, the pauses between my breaths got longer and longer, until I got my last gasp of air. The oxygen being cut off from my brain, I collapsed and my heart completely stopped. In these last moments, your life really does flash before your eyes. All these things came flooding into my mind. Wrongs I never made right, truths I never told, but mostly regret for harming my body the way I had over the years. Also, had I died, no one would have ever understood why I developed this eating disorder. For 16 years I didn’t tell a single soul that, as a child, I had been sexually abused by a family member. In my mind,  the less I ate, the less a man would find me attractive, and then no one would want to take advantage of me.

I begged in my mind for a second chance, over and over. Then, there was nothing. I blacked out. I thought that was it. By a literal miracle I woke up. Multiple doctors told me  it was a miracle that I was alive. Normally, when your body is that damaged it’s not strong enough to kick start again. Statistically speaking, I should have died. The first thing I saw when I woke up was my mother’s face. I’ve never seen her so sad, broken, and helpless. I can’t really explain how this moment feels, but I can explain the spark it lit in me. It may have been a tiny, weak, spark…but for once, it was there, for the first time in years. After much thought, I went to my mother.  I told her that I thought I had a problem, that I needed help, and for once in my life I actually WANTED the help. Admitting I had a problem and asking for help was so hard.   But little did I know,  asking for help would not be the hardest part of recovery for me.

The first 3-6 months in recovery were difficult both physically and emotionally. After years of restriction my digestion had slowed down, causing pain and discomfort as I worked towards weight restoration. I also experienced a lot of anxiety with the weight gain and the resulting changes in my body.  But at some point I noticed that I was also gaining back something else, my self-confidence.  Every bite of food was a shot in the battle against anorexia. And anytime I felt weak or like going back… I remembered that night and my mother’s face. Yes, recovery is damn sure hard. But it’s so much better than being stuck in the hell of an eating disorder

When I was doing yoga during the worst part of my illness, it was minimal. I was able to teach, but many of my students could tell I was sick. I had minimal energy to contribute. My view of yoga was distorted/affected by the eating disorder. I saw these beautiful, perfect Yogis online, and thought if I skip a meal, not only can I numb myself but also maybe look like them one day.

When I began my recovery I promised myself I’d only use yoga as a means to heal, and if it turned into me feeling like I NEEDED hot yoga or I NEEDED it to change the shape of my body, I would stop. And yes, it did happen sometimes. But then I’d shift myself, and make myself meditate. To reach inside and see WHY I was really trying to push myself too far.

I don’t say this lightly–yoga literally saved my life. If I was feeling anxious, I’d focus on my breath. If I was in pain from digestion, I’d go into child’s pose for ten minutes. If I was feeling insecure, I’d meditate. I know everyone has their own healing outlet, but yoga really can help all walks of life. It’s amazing to me that something like yoga can be a great form of therapy for someone mentally and physically.

Over a year later, I’m back teaching classes more passionately than ever. I’m actually LIVING. I’m not living in fear or hiding from the world. Mostly importantly, everyday I love myself a little more. Anorexia is something I will deal with forever. I developed osteoporosis from this. Knowing I’ll have this forever, not knowing how it will progress because I harmed my body is tough. However, I have something no medicine can give me. LOVE. Love for myself, and I truly believe I’m strong enough to live this life to the fullest.

If you or someone you know is suffering from an eating disorder, know that you are not alone and that there is help. For more information and resources you can call the National Eating Disorders Association Helpline at 1-800-931-2237. 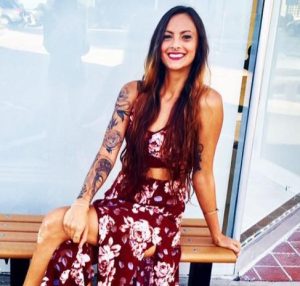 Britta Pryor is a free spirited, fun-loving, yoga teacher and student! She is a 200 E-RYT and has studied extensively under Joe Barnett. Britta teaches Yin, SUP Yoga, Acro Yoga, and partner yoga! Other than yoga, she likes to spend my time crafting, reading, or going on adventures! You can connect with Britta on Instagram at @tattoos_and_yoga & on her Britta Yoga Facebook page.