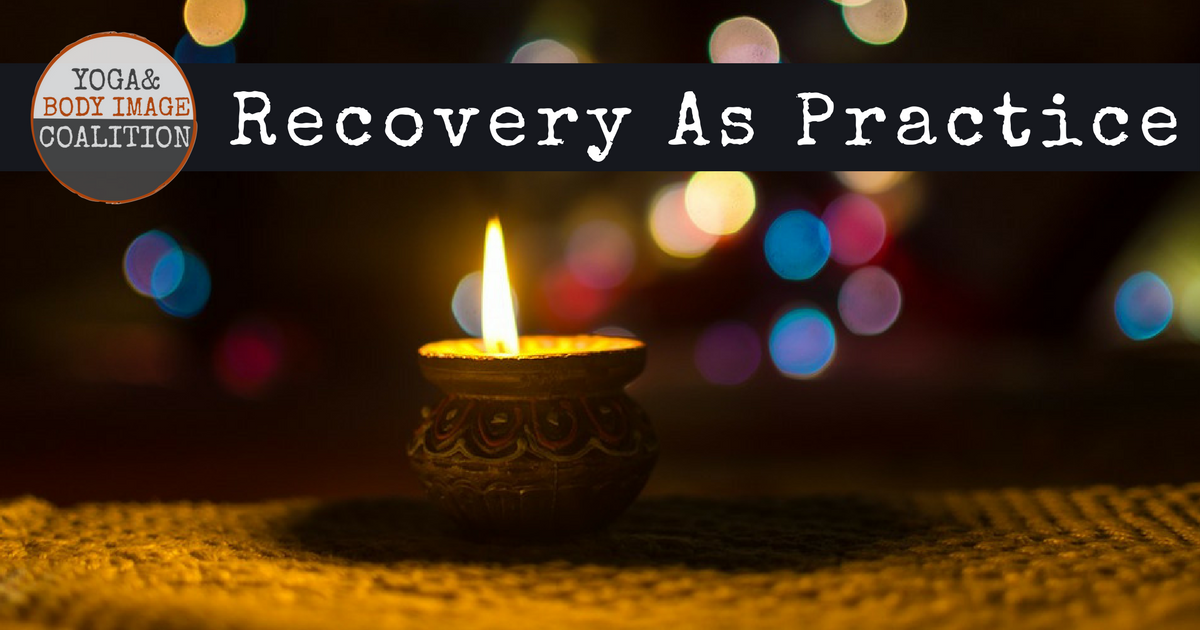 The connection between yoga and my eating disorder was not initially apparent, nor was it a direct line from point A to point B.  Many people in recovery can probably tell you they have heard at one point or another that recovery isn’t linear, and boy, isn’t that the truth, not just in how things unfold, but the multiple starts, stops, steps back, and leaps forward!  No, my journey with yoga, with recovery, with myself, instead occurred in a series of seeming unrelated events that made up my life, which now, in retrospect, have a beautiful, congruent, seeming continuity that lends itself to gratitude, even if parts of this journey has been murky, dark and certainly uncomfortable. 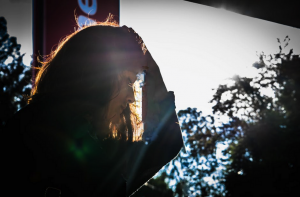 My history with disordered eating began as a middle schooler, but it would take more than half my life to find my way to recovery and learn that my struggle was not, in fact, normal or a moral failing.  Always having been larger bodied compared to my peers, in the higher percentiles on the growth chart, I received messaging early on that my body was unacceptable, and something to be controlled, tamed, and manipulated into a state of socially acceptable submission.  Primed with diets, depravation and restrictions of various types, I found rebellion, comfort, and sometimes simply the need to feed my hunger with binge eating.  This took on many forms in different stages of my life, and I felt trapped in patterns that perpetuated with every new diet I tried, with challenges faced at each stage of my life, as I was unarmed with the appropriate tools to cope with as these challenges appeared, and with growing disconnection from my body, my spirt, myself.  There were times I would overcome the deep shame I felt and try to convey to a medical professional the depth and extent of my disordered eating, but counsel would always come in the form of sympathetic understanding of my emotional eating, encouragement to just try harder to be better and refrain from these behaviors and a new diet to try to shrink my ever expanding waistline.

So much of the messaging I received in my life was geared towards the largeness of my body, messaging that told me I was only worthy if my body existed differently than it was, and as a consequence the opportunities I had to connect with my body or understand it or move it in a way that was joyful were rare.  Somehow, I recognized that I could challenge this messaging, even if changing it wasn’t going to be a simple fix, and that it was my choice to do so.  I made a series of very empowering choices that led me to taking my first yoga class on a snowy January morning. I arrived at my local studio for a hatha community class terrified and embarrassed, confirming my fear that I was the largest person in the room, but I learned in that first class that I was just as welcome there as any of the others in the room beside me.  Despite struggling, even hurting, in that first class, I came back.  And I kept going back, learning how to modify asana, learning how to breathe, learning how to be present, and perhaps most importantly, learning that this was practice.  There was no such thing as being good at yoga, in the typical sense of being better than others or winning some competition.  Yoga wasn’t like other physical activities that had that inherent competitiveness.  And while I believe there is sometimes value in that type of physicality, yoga is not the space for it.

Introduction of the idea of practice gave me a way to relate to goals and growth both on and off my mat in a way that was healthy, instead of the all or nothing rigidity I had previously framed much of my life.  As I learned later, practice would be a potent concept in my recovery that ultimately set me free from many disordered behaviors.

I found recovery after yoga, at a time in my life that I wasn’t actively practicing yoga.  I was at the lowest point I had ever been, even while the rest of my life more or less looked okay and normal, maybe even great.  I was binging nearly every night, finding myself in deep depression, and feeling an immense void in my life.  It led me to speak to my physician and really lay it out for her.  I was acquainting myself with eating disorders to support a friend who shared her experience with me, and quickly realized that I was reading about myself.  The way I was struggling, the way I felt, it could be named, and it could be addressed.  I wasn’t going to leave my doctor’s office until she heard me, and understood that my trouble with food was much more than emotional eating, and that I desperately needed help.  And she heard me, and I connected with a wonderful psychologist who treated binge eating disorder.

We worked on the standard CBT, cognitive behavior therapy, and I did the work to learn the root of my disordered behaviors and begin to change them.  It began to work, but I was daunted by feeling I was still struggling and lapsing into the disordered eating behaviors that defined my disorder.  I would make a judgement and determine that my recovery was going well, and then if I felt I slipped up, I would grow discouraged.  It was a hallmark of the all or nothing rigidity that had previously stifled my growth in other areas of my life but I didn’t know how to overcome it. Until one day, in something my therapist said in passing at the end of one session seemed to catapult me into recovery.  In whatever it was that I was supposed to work on that next week, those details evade me now, he said to me, “Perhaps your practice this week could be…”  And suddenly something clicked for me. 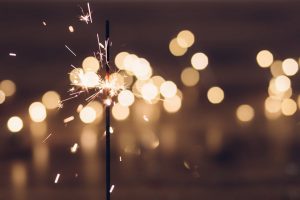 The word practice stayed with me the rest of the day, it resonated with all that time I had spent on my mat in the years before, and the lessons I had learned there that allowed me to make so many positive changes in my life, to frame goal setting with less rigidity, to open myself to the possibilities of growth that weren’t attached to judgement.  It dawned on me that recovery itself could be a practice, and when I began approaching it this way, practicing recovery became much easier.  In the way that learning challenging asana is easier when you accept it as practice, and you grow to understand that with each attempt, each challenge and struggle you are growing and getting better, I could accept that this is how I could and would experience recovery both at the time and through the rest of my life.

Practice has defined my recovery, and now defines much of how I live my life.  Embracing recovery as practice, life as practice, yoga as practice, lends certain permissiveness that I really believe, and have experienced, fosters amazing capacity for growth.  I see this in my students now when I teach when they give themselves permission to struggle and approach that struggle with compassion instead of rigidity, and its beautiful. It takes practice to embrace practice, but perhaps this is one of the most precious gifts yoga has given to me:  the capacity to be present and patient and connected enough to keep at it, to try, to adjust and readjust, to visit and revisit, and ultimately embrace all of this as part of the journey, as progress and as practice. 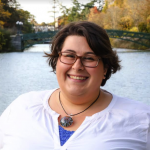 A yoga practitioner since 2009, Nadia El-Fawal completed her yoga teacher training in the spring of 2017 and is a Yoga Alliance registered yoga teacher (RYT-200). She embraces the idea that yoga is for all bodies and all people. It is her passion to teach her students that all bodies can find an expression of asana (physical postures) that best suits them and learn to utilize the tools and gifts that yoga offers to serve them where they are presently in their practice and their lives. She is a community partner with the Yoga and Body Image Coalition, and seeks to continue creating inclusive, body-postive spaces where students can experience yoga as a transformative tool for their personal lives and for their communities.