Practicing Collective Care And Radical Self Love In The Time Of Neo-Fascism | 7/15/17 | Los Angeles, CA 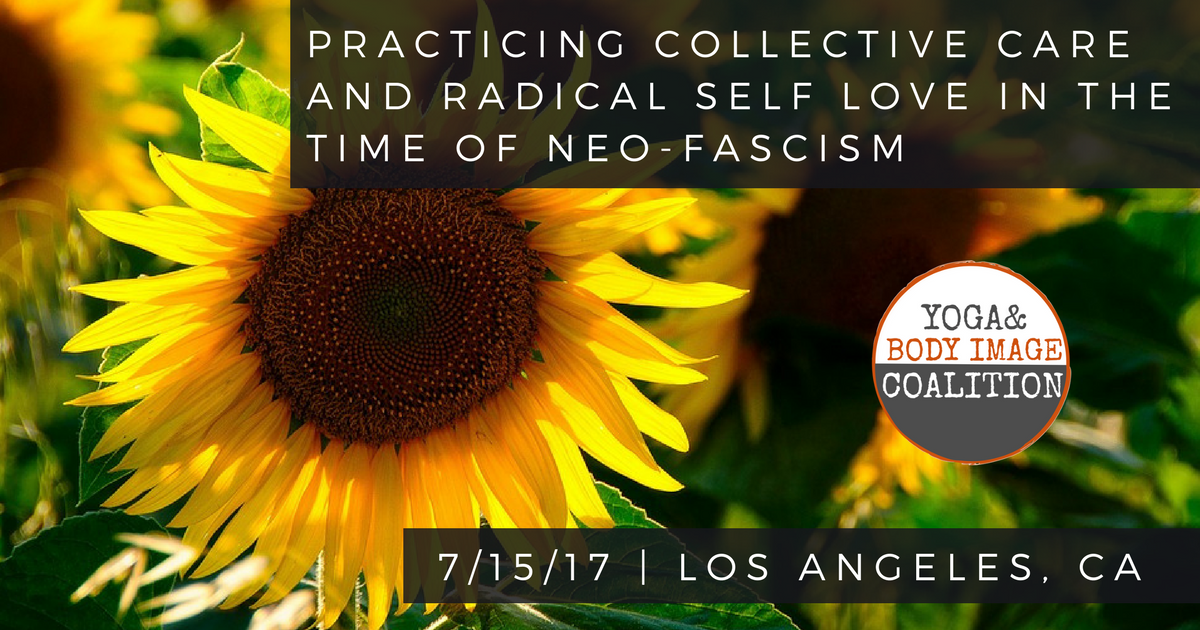 Using AF3IRM’s School of Youth Activism (SOYA) as a vehicle, we explore what collective care means as opposed to self-care. We as transnational feminists believe that practicing self-care is not enough, as it does not address structural oppression that adds to our stress and trauma both as individuals and marginalized communities. SOYA was the first program of its kind, as it combined trauma-sensitive yoga, sensory activities and social justice workshops to fuel the mind-body connection and help teenage girls form a social support network during these turbulent times. This program is part of a  Workshop Series that runs throughout the year and supports themes presented in our Annual Spiritual Justice Conferences in Oakland, Los Angeles & New York. The funds will go towards funding the next round of SOYA.

Saturday July 15, 2-4pm
Presented by Skylar Perez-Grogan and Ivy Quicho
$10 suggested donation, but no one will be turned away for lack of funds

Ivy Quicho is the National Chairperson of AF3IRM, the first organization to intentionally put the theories of transnational feminism into practice and action. AF3IRM is a national organization with 10 chapters across the country and has been committed to fighting oppression in all its forms for over 28 years. Born in Alberta, Canada, Ivy is a first generation Filipina American. Her activism began as a student organizer in 2000 fighting for ethnic studies/Pilipino studies at the University of California, Riverside. From there she worked in the community as a youth organizer leading high school programming and campaigns in LA’s Historic Filipinotown. In 2009, Ivy received her Master’s in Social Work from the University of Southern California and was the Executive Director of the Mariposa Center for Change, a transnational feminist nonprofit for women and girls of color. She now works in the labor movement and has been organizing a variety of workers for over nine years.

Skylar Perez-Grogan is the Youth Coordinator for the Los Angeles chapter of AF3IRM, a transnational feminist, anti-imperialist organization dedicated to grassroots organizing against oppression in all its forms. She was one of the coordinators for the first ever School of Youth Activism, a youth program that combined trauma-sensitive yoga, sensory activities and social justice workshops. She works as a social services provider for an agency dedicated to helping homeless LGBT youth. A proud Xicana, she believes in the importance of intersectionality within the feminist movement.

AF3IRM is a national organization of women engaged in transnational feminist, anti-imperialist activism and dedicated to the fight against oppression in all its forms. AF3IRM’s diverse, multi-ethnic membership is committed to militant movement-building from the United States and effects change through grassroots organizing, trans-ethnic alliance building, education, advocacy and direct action.

With the slogan “a woman’s place is at the head of the struggle,” AF3IRM is an all-volunteer, grassroots organization whose members recognize the intersectionality of their struggles and the absolute necessity of women’s revolutionary resistance.