How Accessible Treatment Became My Passion 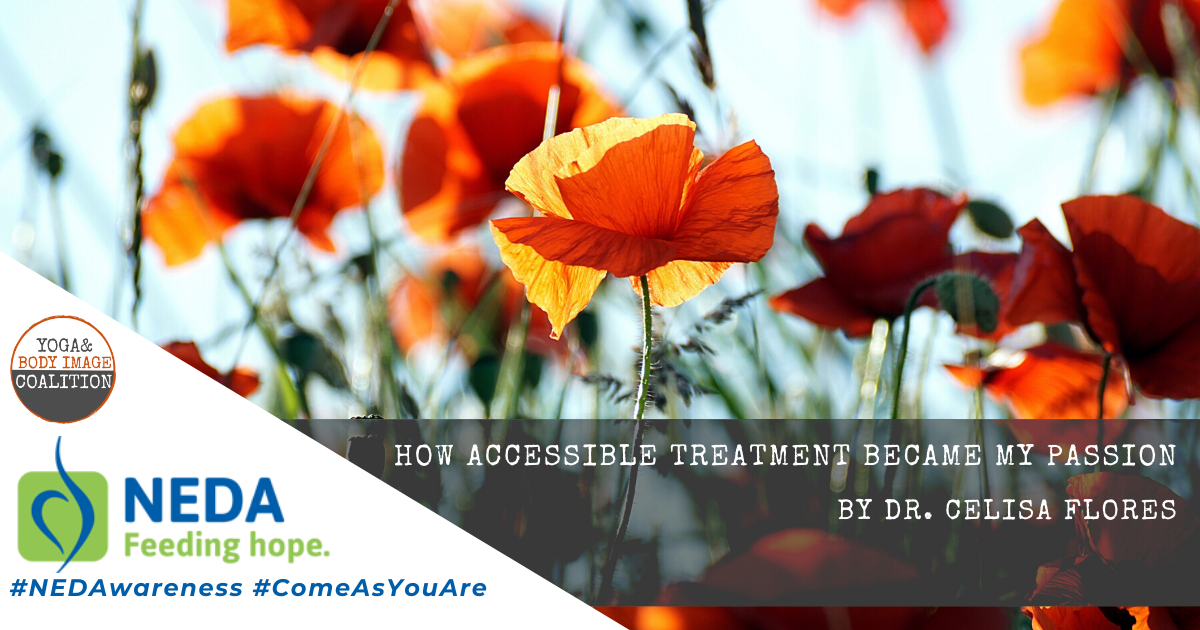 The Yoga and Body Image Coalition is a 2020 Featured NEDAwareness Week Partner.  The following is a YBIC National Eating Disorders Awareness Week post that highlights how the practice of yoga can be an integral component in the effective treatment of and on-going recovery from eating disorders and disordered eating. The shares included are from those who have first-hand experience with disordered eating or from those who are called to share their body acceptance journeys.

My journey with anorexia behaviors began when I was 11, but in hindsight, there were contributing factors much earlier, sprinkled throughout my childhood. My temperament, my biology and health factors, trauma history, social factors, and interpersonal and relational history were all factors that put me at risk and contributed to sustained anorexia.

Before starting down the road of anorexia, in the time before the internet, I read medical books about eating disorders and felt like anorexia sounded better than bulimia because of my aversion to vomiting. Now, I understand that anorexia and bulimia are much more complex, but at the time, general understandings were limited. I also understand that the brain variance often found in brain studies of people with anorexia were likely present before my eating disorder symptoms were obvious. I do not believe that we can override our body’s most primal drive to survive without some biological variance.

My anorexia continued into high school, and in spite of extreme weight loss, health consequences, cognitive impairments, social disruptions, chronic lethargy, and comorbid depression, never once was it suggested that I get treatment. As a reference point, I now realize that at the peak of my eating disorder, I met criteria for inpatient hospitalization, and likely would’ve been advised to stay for several months. But I lived in a community where there were no eating disorder treatment centers and though some opened briefly, there are currently none at this time. I lived in a family that generally avoided most medical treatment other than the annual dentist visit. And, at the time, there was an overarching belief that girls of color didn’t get eating disorders. Treatment did just not seem accessible to me, even if I had wanted it.

In high school, I disclosed to a few people who had noticed my lack of eating. They held me more accountable than I had held myself and eating once a day made me feel like I was solidly in recovery, in spite of irregular cycles and still being severely malnourished. My pseudo-recovery carried on for some time, but my health still seemed compromised, as I continued to have absent cycles and occasionally still fainted. Then, I found out the sudden nausea I developed had a cause I didn’t anticipate; I was pregnant at sixteen.

My first prenatal visit was mostly lecturing that I was too severely underweight to carry a pregnancy and the doctor telling me he wouldn’t see me again until I was at least four months pregnant because he didn’t think I would be able to carry the pregnancy that long. No recommendation to follow up with a dietician, therapist or any other intervention; just sent off to “figure it out” on my own, at sixteen. I was completely shocked and devastated. I was at a loss but decided I would do whatever I could to sustain the pregnancy. My son was born five days after his expected due date at a healthy almost nine pounds and twenty-two inches.

It was never easy; recovery can be messy, and that is only exacerbated without proper support. We all come into recovery differently, and I had to use the resources I had access to at the time: yoga, meditation, and a small community where I felt understood. It was years between stopping the behaviors of anorexia and receiving therapy, but there were plenty of teachers along the way that came in many forms.

I now work for Center for Discovery, where over ninety percent of patients use in-network insurance benefits in twelve states across the county. Working to create access is so important to me because I understand the struggle of living with an eating disorder when treatment seems impossible. My hope for anyone living with an eating disorder or disordered eating is that treatment is an option, and no matter where you believe your level of severity lies, you can receive and deserve treatment and recovery.

Dr. Celisa Flores has worked as a therapist, program director, and clinical outreach professional in a wide variety of mental health treatment setting since obtaining a Master’s in 2007 and Doctorate in 2013. Additional training as a yoga and meditation facilitator, as well as doula, she has been able to draw from a variety of modalities to support self-empowerment and recovery.
Now proudly with Center for Discovery, providing clinical outreach for Orange County and the Central California region. This role has included national and international training and speaking engagements on eating disorders, mindfulness, yoga, body acceptance, and professional wellness, as well as facilitating accessible, body-affirming yoga annually at the Los Angeles NEDA walk. With a passion to support other therapists and community members with understanding eating disorders and treatment as well as self-care and overall wellness, she is always working to share information, research and training.