It’s Time to Talk About It! 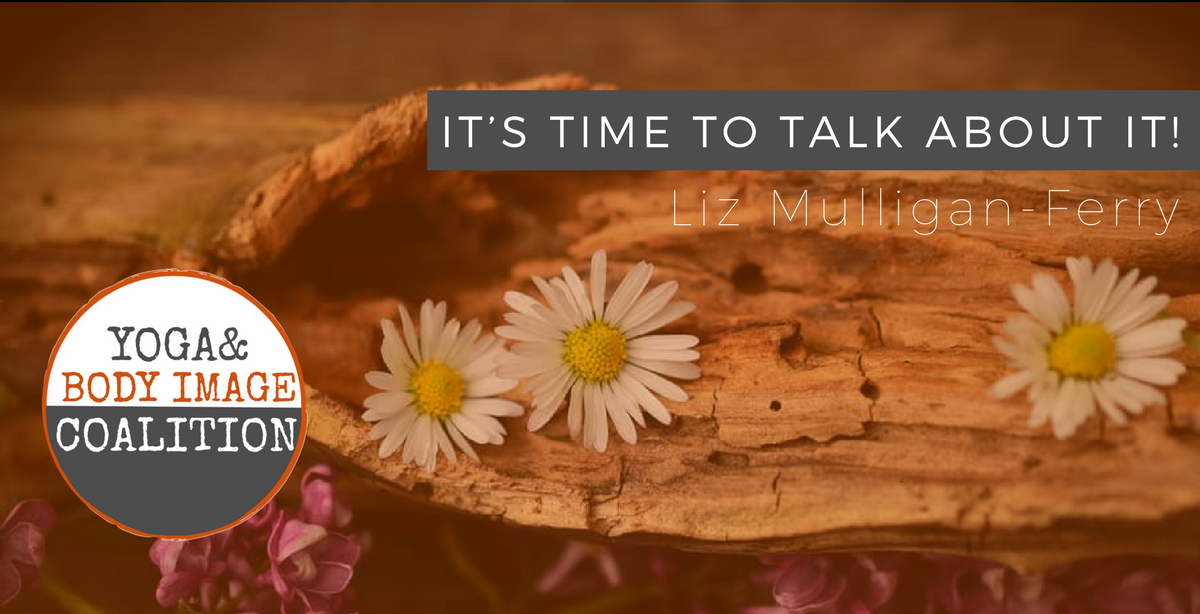 The following is third of six YBIC National Eating Disorders Awareness Week daily posts that highlights how the practice of yoga can be an integral component in the effective treatment of and on-going recovery from eating disorders and disordered eating.

It’s that time of year again: National Eating Disorders Awareness Week. Wait, you’ve never heard of it? It’s not on your radar like Breast Cancer Awareness Month or Movember? Little surprise: despite high rates of mortality associated with eating disorders, they don’t get much air time. Anorexia, bulimia, binge eating disorder, and eating disorder not otherwise specified (EDNOS) are often viewed as choices—why can’t she/he just eat/stop eating?—or brushed off as being “a picky eater”— or its more socially acceptable (but in some ways more harmful) cousin, “healthy.” It’s time we removed the stigma and myths around eating disorders, and I feel a responsibility to help do that.

I struggled with an eating disorder for over a decade. Like many others, my eating disorder (ED) started innocently enough: I was a lean kid who gave very little thought to my body size, exercise, or what I ate through childhood, adolescence, and even into my first year of college when I gained some weight. Honestly, I didn’t really notice the weight gain—it wasn’t until someone close to me said I looked like I’d been “poured into my pants” that I even contemplated losing weight. But once the idea was sparked, I completely bought in. Food became the enemy, though it was all I could think about most of the time. I became obsessed with exercise, though I usually forced myself to do it so I could eat later or as punishment for eating something “bad.” My personality changed—I became anxious and withdrawn, no longer the fun-loving person I’d been when college began. I stopped menstruating for several years. And I wasn’t there for the important people in my life in the ways I wanted and needed to be.

Recovery from anorexia came slowly, in fits and starts, and included a long interlude with bulimia. (It’s not uncommon for people with eating disorders to experience more than one type. For me, years of restriction and control gave way to bulimia and its more reckless symptoms, as my body seemed to hit a point where it loudly said, “enough!”)

I am now fully recovered, a “state” that sounds static but involves regular upkeep. It has only been in the past few years that I’ve been able to say that truthfully—which is where yoga comes in. During my recovery, I saw therapists and nutritionists, joined various groups and workshops, was assigned a “buddy,” took up journaling, and read book after book after book. Yoga was not an explicit part of my recovery plan; I came by its benefits quite by accident, but over time it emerged as a crucial component in my recovery for two key reasons: yoga increased my physical awareness and decreased my need for external validation.

A hallmark of eating disorders is repeatedly ignoring internal hunger and fullness cues. Restricting, bingeing, purging—none of these are kind or attuned responses to your body telling you it needs food or that it’s had enough. Yoga, on the other hand, teaches us to quiet the mind, turn inside, and simply be.

We learn to observe without judgement. How does my body feel right now? Is there anything it needs? After a few yoga classes, I started to notice that on the days I practiced I was much more aware of my hunger and fullness signals.

It took years before I could actually respond to these signals in a healthy way, but noticing the connection between practicing yoga and feeling true awareness of my physical needs made me realize, there’s something special about this yoga thing.

People with EDs also tend to be intensely concerned with what others think of them, I believe in part because sufferers are so disconnected from their internal selves. I repeatedly allowed my feelings of self-worth to hinge on someone else’s assessment of me or on my own warped judgement. Through yoga and meditation I’ve realized that validation—for being “enough,” for the choices we make—doesn’t come from the outside world, or even from our own perceptions. It’s innately within us. We are already worthy.

If this is your first time recognizing Eating Disorders Awareness Week, welcome and thank you. It’s mine too—at least in this public way. I hope it won’t be our last.

If you or someone you know is suffering from an eating disorder, know that you are not alone and that there is help. For more information and resources you can call the National Eating Disorders Association Helpline at 1-800-931-2237.

Liz Mulligan-Ferry has been practicing yoga since 2003. She first came to the practice because it seemed like a nice complement to long-distance running, but quickly discovered it was so much more. She believes that yoga is for everyone, and her teaching style makes yoga accessible, relatable, and relevant. Through proper alignment and healthy engagement, Liz believes students can learn to open to their own inner goodness and grace. In addition to teaching yoga, Liz conducts research at a nonprofit dedicated to increasing workplace diversity and inclusion. Originally from Tacoma, Washington, Liz lives with her husband and dog in Brooklyn, New York.