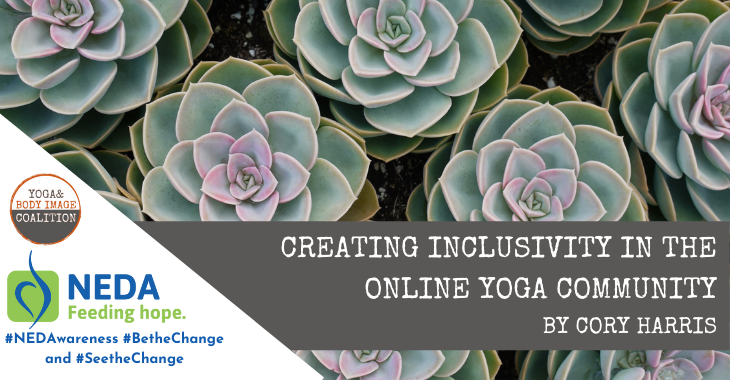 The Yoga and Body Image Coalition is a 2022 Featured NEDAwareness Week Partner.  The following is a YBIC National Eating Disorders Awareness Week post that highlights how the practice of yoga can be an integral component in the effective treatment of and on-going recovery from eating disorders and disordered eating. The shares included are from those who have first-hand experience with disordered eating or from those who are called to share their body acceptance journeys.

A few years ago, I took a journey to help me heal from agonizing body image dissatisfaction. I learned a lot of things on that journey, but one of the most profound things that I learned is how the media strongly affected how I felt about my body. Every day we are inundated by subliminal messages about what society believes what an attractive body looks like. The television shows all feature skinny women and men with broad shoulders, narrow waists, and big arms. The theme is more overt on social media as photos with “ideal” bodies get the most likes and are featured more than a person with an average body. Some days it can be a minefield trying to avoid subliminal messages that tell us what our bodies should look like if we want to be attractive.

My healing journey also led me to yoga. I absolutely fell in love with the practice. What I loved about yoga was that it made me appreciate everything that my body could do for me instead of what my body looked like. It made me stop thinking of my body as an object for other people to admire and put more emphasis on how my body helps me function. It turns out that yoga is a great way to build positive body image. There is a growing body of academic research that shows that yoga is an effective practice of building positive body image with individuals with an eating disorder and individuals struggling with body image. Researchers discuss that yoga is a great intervention because it is accessible and people of all shapes, sizes, flexibility, and ability can participate in and experience the benefits in yoga.

However, the media portrays a yoga practitioner as someone who is thin, athletic, and flexible. Academic research studies underscore this point by reviewing images from popular yoga magazines and Instagram and found that most images feature women who are thin, athletic, flexible and who could do advanced yoga postures.  Research has not been completed on images that feature male yoga practitioners in the media, but I would suspect that researchers would find that popular images would feature a thin, muscular man who would be photographed doing an advanced yoga pose as well. This notion that you must look a certain way to do yoga goes against the fundamental beliefs of yoga and against the scientific research.

More and more people are using social media and using these platforms to connect with individuals who have the same interests and hobbies as themselves. It is entirely possible that a person who may be interested in beginning a yoga practice may be too afraid to begin because they do not look like the yogis in the photographs with the most likes. Therefore, I am participating in the See the Change, Be the Change campaign alongside the National Eating Disorders Association (NEDA). I am making strides in helping others #SeeTheChange on social media by educating others about body image and yoga and I am being the change by creating a safe space for ALL yoga practitioners no matter what their bodies may look like or how flexible they can be.

In my research, I have learned that the vast majority of the population struggles with their body image to some extent. Extreme body image dissatisfaction can lead to eating disorders and other mental health issues. Yoga has helped me in so many ways with my healing journey and it is my most fervent wish to create an inclusive community where everyone can feel included. Together let’s work together and #BeTheChange. 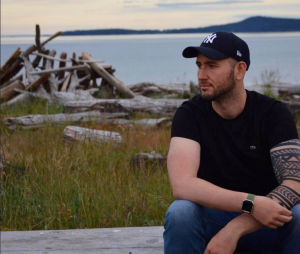