Race based stress and trauma are so common in communities of color that we are not always aware of their negative impact on our health and well-being. Yet, race based traumatic stress injury is real and pervasive contributing to anxiety, and levels of distress that compromise overall health and a general sense of well-being. Restorative Yoga is a self-care tool that can help effectively manage the stresses and trauma that arise from the daily-lived experiences of persons of color. 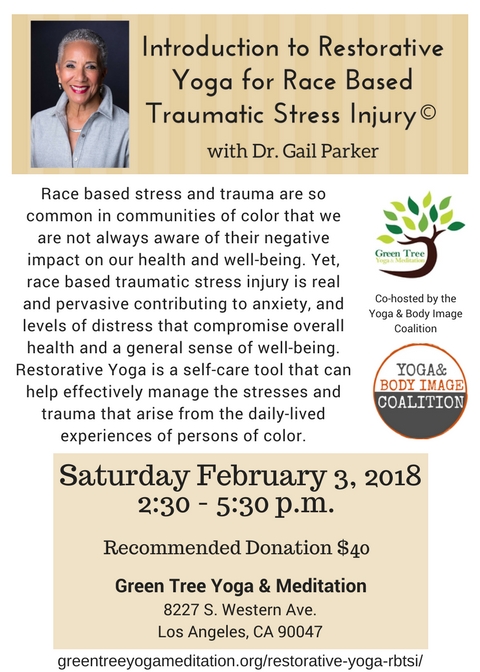 In this workshop you will learn:
• What Race Based Traumatic Stress Injury is, and how it differs from PTSD
• How to identify areas of stress and trauma
• How to utilize Restorative Yoga as a self-care tool to effectively manage the stresses and traumas that arise from daily-lived experiences as a person of color
• How Restorative Yoga buffers the nervous system, increases resilience, and strengthens your psychological immune system. 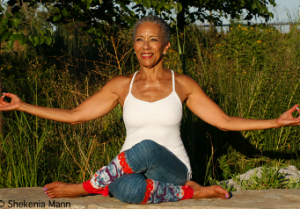 Gail Parker, Ph.D., C-IAYT, E-RYT 500, is a psychologist and a certified yoga therapist. She is a faculty member in the Beaumont School of Yoga Therapy in the department of Integrative Medicine at William Beaumont Hospital in Royal Oak Michigan, where she teaches mind/body strategies for reducing stress and healing emotional trauma to aspiring yoga therapists. Her broad expertise in behavioral health and wellness include forty years as a practicing psychologist. Dr. Parker is a life long practitioner of yoga and is well known for her pioneering efforts to blend psychology, yoga, and meditation as effective self-care strategies that can enhance emotional balance, and contribute to the overall health and well being of practitioners. Dr. Parker has a special interest in utilizing and teaching Restorative Yoga and meditation as self-care practices for managing ethnic and race based traumatic stress. She is a nationally and internationally renowned media personality, educator, author, and thought leader.

Dr. Parker was a faculty member in the ground breaking Co-Curricular Yoga Therapy Program at Wayne State University School of Medicine, teaching Yoga Therapy to first and second year medical students as part of their academic curriculum. She was an adjunct faculty member in the Ross School of Business at the University of Michigan in Ann Arbor, teaching “Effective Managerial Coaching and Counseling” to executives for ten years, where she was also an Executive Coach customizing and conducting leadership development programs through the Department of Executive Education.

Dr. Parker has appeared as a psychologist expert on local and nationallysyndicated talk shows, including seven appearances on the “Oprah Show”. She was featured as a health and wellness expert on the benefits of yoga and meditation, in a nationally syndicated PBS health talk show series called “Feel Grand”, hosted by Emmy Award winning actress, Jane Seymour.

In 2006 Dr. Parker appeared in the inaugural edition and three subsequent editions of “Who’ Who in Black Detroit”, a publication celebrating African American achievements. In 2011 she was honored by the Michigan Chronicle as a “Woman of Excellence” and is featured in volume one of Vital Signs, A Real Times Media tribute to African American achievements in the health care industry. She serves on the Michigan Department of Civil Rights MDCR Race4Equity task force, whose mission is to combat health care disparities in Southeast Michigan.

Dr. Parker has authored  The Art and Skill of Restorative Yoga: A Self-Care Guide, and  Restorative Yoga for Resilience: A Practitioner’s and Teacher’s Guide, and a blog called  Taking Yoga Off Your Mat. She is a featured author in the book  Yoga Rising: 30 Empowering Stories From Yoga Renegades for Every Body to be released in January 2018. She is married and the mother of one son.